For the third day in a row, a mysterious cell phone woke me up at 4:30. I had expected crying babies … phantom technology, not so much. At first I thought it was my upstairs neighbor, until I met her, carrying a flashlight, on the stairs. “Oh, I thought it was YOUR phone!” Turns out, the phone in question was in a locked apartment that belongs to the woman who runs the Center … who was on an outreach and would be back the next day. 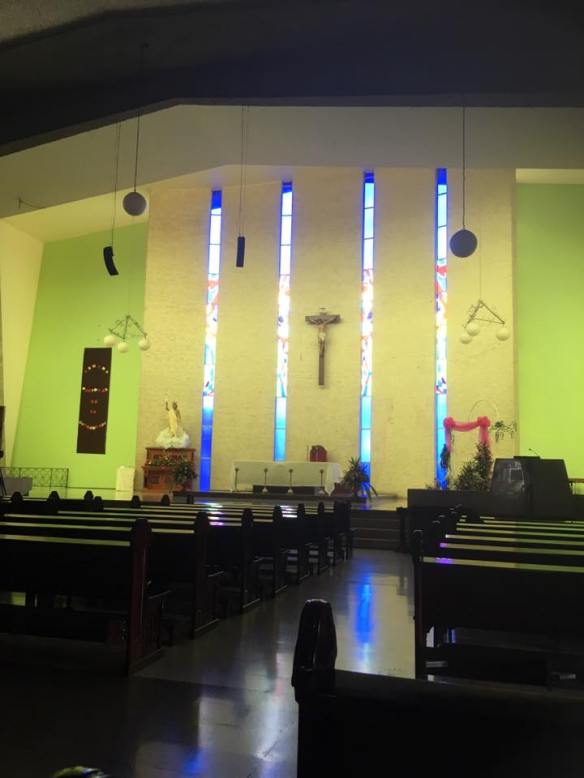 Ah, well. I decided to try out the public transport system in order to make the 8:00 Mass at the church near the town square. I grabbed a handful of change, my dictionary and Spanish-English Bible, and a water bottle and headed out. The gate was locked, but one of the mamas offered to let me out if I’d pick her up some diapers. Seemed like a fair exchange.

Now the thing you need to know about roads in this area is that they are not for the faint of heart. They are serpentine and narrow, and the “shoulder” is an abrupt drop-off; a truck coming from the other direction could startle you into making a turn that would take out your undercarriage. No joke. At night this is particularly scary, since the fog flares at regular intervals, obscuring oncoming traffic and the hazard cones that they erect in the middle of roads in lieu of actually, you know, repairing them.

But if it was my turn to go, at least it would be on my way to Mass. So I got on the bus, sat next to a nice young woman, and attempted to ask if I needed the same bus on the way back. Judging by the horrified look on her face, I must have said something like, “Can I have your firstborn child?”  So I sat quietly until I saw the church spires, then got off the bus and hoped for the best.

The Eglesia de San Benedicto offers adoration before Mass in a side chapel. I went in and found a seat, and watched as each person who entered the room went to the tabernacle, gently stroked the front, resting their hand on the vessel for a moment. Some approached the tabernacle on their knees. One white-haired old gentleman got as far as my pew before spotting a tiny white stone in his path, the size of a lentil. “Phht,” he snorted, swiping it out of his way. It made me smile … apparently piety has its limits.

Feeling self-conscious about not having properly (culturally speaking) reverenced the tabernacle on the way in, I made my way to the front as I prepared to leave. I knelt and stroked the lower edge of the ornately carved tabernacle. At that moment, I thought of the woman who clutched the edge of Jesus’ garment, desperate for healing. It is the gesture of one who is utterly convinced of her own dependency, and unwilling to bypass even the tiniest chance for healing.

After Mass I ventured out to find diapers, then some galletas (cookies) to share at lunch, chocolate chip and mango-flavored empanatas. Seeing these little pies reminded me that I had not yet found the local specialty, cheese filled pies made from Turrialba cheese. So I fixed that.

As I ate, I composed one of those letters an editor hates to send: a rejection letter to an author who had worked hard on her proposal, but I had been unsuccessful in getting it through committee. The Gospel today spoke of a woman laboring to give birth, the joys and sorrows associated with that experience. In a certain sense, authors labor, too … And its always hard when the labor doesn’t produce a real, live book. And yet, I also knew that God’s plan for that author is not foiled by one closed door. I simply had to detach, and trust.

I made it back to the Center (via taxi, which was only slightly more than bus) around lunch time, tired but happy with the outcome of my first solo adventure here.

Home. Safe. Thanks be to God.