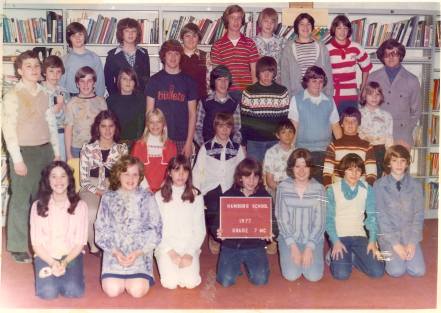 See that geeky girl in the first row, second from left? Permed and bespeckled, wearing a too-short dress even though everyone else was wearing cool blue jeans?

You’re looking at the genesis of a foster mom.

Like most middle-school students, I led a fairly self-involved existence. It was years before I discovered that not everything is always as it seems. The pretty, popular girls — the ones who could wear mascara and had pool parties at their house that I was never invited to — had parents who were divorcing or drank too much. The unpopular kids … well, they had their own stories. It’s amazing how resilient kids can be.

Me, I was living out my own family drama. My sister’s cancer and the related financial devastation my parents faced had left its mark on my childhood. I was a good student primarily because books were my escape (we had no television, and secular music was forbidden). Money was so tight, there just wasn’t enough to buy the jeans the other girls were wearing. I didn’t even ask, because I knew the money wasn’t there. Instead I wore my best friend’s hand-me-down water print dress. It was too short, and my mother made me wear a longer skirt underneath. But to me, if was the epitome of haute couture.

There was a lot I didn’t tell my parents back then, not wanting to add to their load. (A neighbor lady who used to watch my sister and me while Chris was in the hospital planted this idea in my head, and it took root.) I spent a lot of time alone. One sweet boy (with the unfortunate last name of “Roach”) who talked to me and sometimes walked me home after school, disappeared after eighth grade, and I never knew what happened to him. I could only hope the rumors weren’t true.

How did all this add up to my becoming a foster parent? When Craig and I first started to talk about having a family, we knew we couldn’t conceive. Adoption was an option, but I kept thinking back to those months of being passed around as a kid, staying with one set of church friends or neighbors after another. I was always being reminded to be good, quiet, helpful. That, too, took its toll.  Looking back on my middle-school self, I can see now that I wasn’t ugly, or fat, or worthless, or unlovable. But back then I felt it to my bones.

I wanted to spare some other kid those same feelings. Each time I passed Catholic Charities in Detroit on my way to and from seminary, I thought about that twelve-year-old, until finally Craig and I pulled in and asked about becoming foster parents. We attended the classes … and next thing we knew, our children arrived on our doorstep.

To be perfectly honest, we were pretty naïve going into it. Like many foster parents, we discovered that sometimes love and compassion isn’t enough to heal the wounded heart of a child. Sometimes you just have to journey with them as patiently as you can — and remind them, over and over, that they are loved, and wanted, and safe. For me, it was the ultimate middle-school payback.

Have you ever thought about becoming a foster parent? I’d like to hear your story!

3 thoughts on “Why Foster Parent? Lots of Reasons… Here’s where it started for us!”