Today’s Gospel message has me thinking about how Mother Teresa used to speak of the poverty of the West, how we are so willing to give our money — but find it difficult to give of ourselves. Perhaps it was for this reason that Jesus said (Mk 10:17-27): 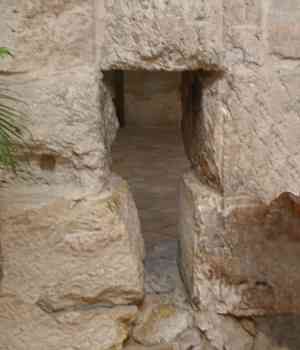 The “eye of a needle” referred to a gate outside Jerusalem, that was built for the city’s protection when under siege. The entrance was so low that a fully laden camel could not pass beneath it – rather, the animal had to be completely unloaded, and bend low to fit beneath.

Isn’t that a wonderful image of Lent, when we are called to divest ourselves of the luxuries of life in order to follow the Lord with humility, in obedience, and out of love — just like Saint Teresa of Calcutta?

Are you looking for a way to build up your marriage during Lent? Be sure to sign up for my “40 Day Challenge” by subscribing to my mailing list (on the right). God bless!