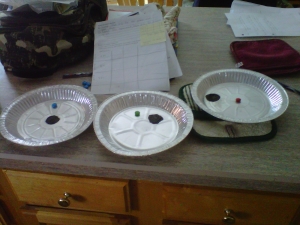 You could have knocked me over with a feather yesterday when a parent FB’ed me to say that Christopher had won “high honors” for his Science Fair project.  “Do all M&Ms melt at the same rate?” was Christopher’s idea — and he held to it while I continued to pelt him with what I thought were better ideas until his teacher said she thought his idea was a good one. Okay, then.

Next, we had to outline the project step by step. We tried pancake grill, top of stove, and in a low-temp oven. We got lots of cracked candies — but they just didn’t melt, per se. Not even at “mouth” temperature.

Finally, we got things rolling at around 400 degrees. So we ran three trials, compiled the results . . . and low and behold, red candies did seem to melt just a tad more quickly than blue or green! (My husband wasn’t sure the difference wasn’t statistically significant, but Chris kept dancing around the kitchen yelling, “I was right! I was right! Red ARE the fastest!” )

Finally we typed it all up (Chris dictated, I summarized), glue-gunned the candies all over the board, and got it into school a whole day early. (Whew!) I wasn’t sure it was what the teacher wanted — I hoped he’d at least get a passing grade. God knows he needs it.

I’m a little ashamed to admit this, but we didn’t attend the Open House on Sunday afternoon.  In point of fact, I forgot about it — but even if I’d have remembered, we probably wouldn’t have gone. It simply never occurred to me that we might want to be there.

The truth is, when raising special-needs kids, it can be a real temptation not to set the expectation bar too high.  Craig and I were both good students; over time, we came to realize that our kids would struggle to get grades in a way we never had.

The truth is, I simply didn’t expect Chris to win Science Fair. After four years of attending honor roll assemblies and watching my children wave to me from the crowd while the rest of their classmates trot up for awards in academic achievement, moral focus, or both, I couldn’t raise my aspirations higher than “I hope he passes.”

But today I learned an important parenting lesson:  I need to believe in my children, no matter what. That’s what a good parent does: She always encourages, always helps . . . and always acknowledges it when she fails to do just that.

Yes, sir, today Christopher won “high honors” for his Science Fair Project!  I can hardly wait for the next assembly, so I can watch him get his ribbon.