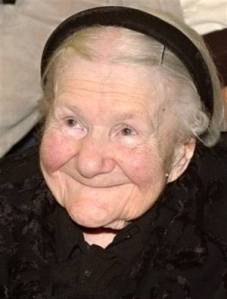 As Father Chas reminded us today, All Saints Day (November 1) is to remember not just the “famous” saints — our brothers and sisters in faith whose life stories and writings are found in hundreds of books, whom the Church has officially declared to be in heaven — but the “little saints” remembered only by a handful of people … and some, not at all.

Today my mother-in-law passed the name of one such person on to me. Her name was Irena Sendler, and she worked as a plumber/specialist in the Warsaw Ghetto during World War II.  Here is what we know about Irena, who recently passed away at the age of 98.  May she rest in peace.

During WWII, Irena got permission to work in the Warsaw Ghetto, as a Plumbing/Sewer specialist. She had an ‘ulterior motive’ …  She KNEW what the Nazi’s plans were for the Jews, (being German.) Irena smuggled infants out in the bottom of the tool box she carried and she carried in the back of her truck a burlap sack, (for larger kids..) She also had a dog in the back that she trained to bark when the Nazi soldiers let her in and out of the ghetto. The soldiers of course wanted nothing to do with the dog and the barking covered the kids/infants noises.. During her time of doing this, she managed to smuggle out and save 2500 kids/infants. She was caught, and the Nazi’s broke both her legs, arms and beat her severely. Irena kept a record of the names of all the kids she smuggled out and kept them in a glass jar, buried under a tree in her back yard. After the war, she tried to locate any parents that may have survived it and reunited the family. Most had been gassed. Those kids she helped got placed into foster family homes or adopted.

Last year Irena was up for the Nobel Peace Prize … She was not selected. Al Gore won, for a slide show on Global Warming.

Eternal rest grant to her, oh Lord, and may your perpetual light shine upon her.
May her soul, and the soul of all the faithful departed, by the mercy of God rest in peace.