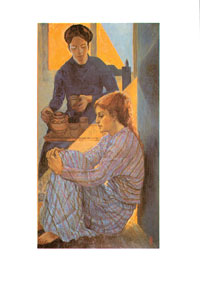 Would you like to hear Heidi’s talk on “Kresta in the Afternoon” from the feast of St. Martha? Just click on this link!

St. Martha of Bethany has always held a special fascination for me — especially since I came across this beautiful image created by the Carmelite Sisters of Reno, who make some of the most beautiful greeting cards I’ve ever seen.  (If you are in the market for notecards, please head over to their website and purchase a few — this one was just eighty cents!)

This afternoon at 3:20 EST, Al Kresta has invited me to come over to the studio and talk about St. Martha, whose feast day we celebrate today. Most people know St. Martha as the sister of Lazarus who was unhappy because her sister wouldn’t help her with the housework. But there is really much more to her than that . . .

Have you ever wondered why — in a culture that saw women primarily as wives and mothers, why two unmarried sisters were living with their little brother without husbands or children. Ever wondered why Jesus befriended them, and was such a regular fixture in their home?  Tune in this afternoon, and I’ll talk about it!

So many people feel detached from God, either through the circumstances of their lives or because of their own perceived sense of failure. When we try to “sedate” that feeling with business, or rigidity, or a need to control, we don’t really get to the root of the problem: a desire to avoid further pain, and to feel loved and accepted at a fundamental level.

Just “knowing” is not enough — the Scriptures show that Martha knew that Jesus was “the Christ, the Son of God,” (John 11:5) a confession for which Peter received a great commendation from Jesus in Matthew 16:

[Jesus] said to them, “But who do you say that I am?”
Simon Peter said in reply, “You are the Christ, the Son of the living God.”
Jesus said to him in reply, “Blessed are you, Simon son of Jonah.
For flesh and blood has not revealed this to you, but my heavenly Father. …”

St. Martha’s confession of faith bore its own kind of fruit, prompting Jesus to raise her brother from the dead — the only time in Scripture in which the Lord acknowledges that person had died (and is not just “sleeping”). According to tradition, Lazarus and his sisters later moved to Cyprus, where Lazarus was appointed by Paul the first bishop of Kittim. This same tradition holds that Lazarus received his palium from the hands of the Lord’s mother.