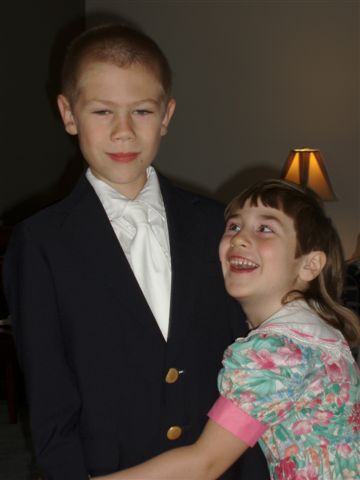 Our children were baptized on May 31, 2005. We waited three long years to do it, and the waiting had not been easy. Especially in the first few months, I was tempted more than once to toss them both in the baptismal font in sheer frustration.

It was ironic that it was while we were in church that I felt the need for grace most strongly the first weeks we had the kids.

Baptizing them right away wasn’t an option; as their foster parents, we couldn’t even get their hair cut without the permission of a social worker.

So each week I’d trot them up for a blessing when I went forward to receive communion, and afterwards I’d trace the sign of the cross on their foreheads with holy water as I entrusted them to God to keep them safe for another week, until they could celebrate their “birthday in the Church.”

Three years later, we stood around the baptismal font as first Christopher then Sarah received the sacrament. “Hurray! Today my sister and I have a new name!” And they did it again, a few weeks later, when their older sister was adopted by another couple. “Yeah! Our sister has a new name!”

“Yes,” the priest had the presence of mind to respond. “She now has the name Christian!”

In the Gospel reading this weekend, John the Baptist — with some understandable hesitation — baptizes the Lord, his cousin. The first reading, from Isaiah 55, harmonizes beautifully with this story. Here’s my favorite passage (vv 9-11):

For just as from the heavens
the rain and snow come down
and do not return there
till they have watered the earth,
making it fertile and fruitful,
giving seed to the one who sows
and bread to the one who eats,
so shall my word be
that goes forth from my mouth;
my word shall not return to me void,
but shall do my will,
achieving the end for which I sent it.

John’s baptism was a baptism of penitence, a one-sided gesture of remorse and of hope … Until the Incarnate Word entered into it. With that divine touch, the heavens opened and God reached out to draw His children to Himself … starting with His Son. The waters of repentance … became waters of rebirth through the touch of the Savior.

In these same waters of baptism, we are reborn as well — drawn by the miracle of adoption into God’s family. Through the physical elements of the sacrament, infused with the divine touch, a spiritual change takes place that is both immediate and gradual, as we draw from that bottomless pool of grace throughout our lives.

These waters cleanse, but they also soften and restore. They make us fertile in love, abundant in joy, and fruitful in hope. “It gives seed to the one who sows, and bread to the one who eats…”

Those of us who choose adoption (and foster care) are imitating our Heavenly Father, pouring love into a little soul that needs to be softened, fed, and restored. These changes are largely spiritual … Yet they are brought about through the stuff of life: the washing and the nurturing, the touching and the listening.

Just as John the Baptist did, we often feel unequal to the task. But if we are willing to commit our lives to God, to follow the light we’ve been given, God gives us the power to participate in the redemption of other human souls … starting with our own. God has promised it, and His Word “does not return void.”

1 thought on “Weekend Ponderings: Feast of the Baptism of the Lord”