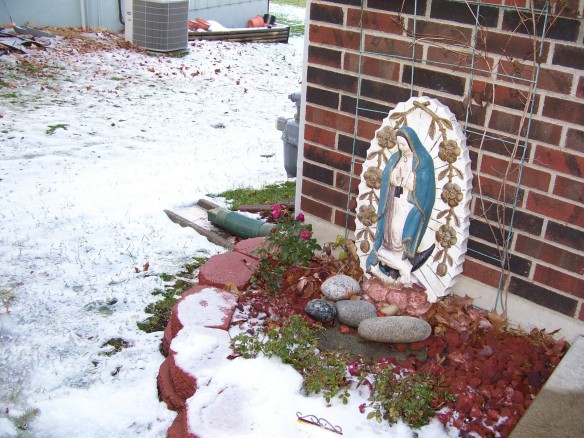 At “Behold Your Mother,”  Christine Trollinger recently published a story about the statue in her “Mary Garden” — and the woman who gave it to her.  She had aborted her child years before, and was still trying to come to terms with what had happened to her.

Today is the Feast of Our Lady of Guadalupe, Patronness of the Americas. The Church celebrates the encounter between Mary, who appeared to a poor man named Juan Diego and gave him an impossible task: to persuade the bishop to build a chapel there.

Filling his cape with roses, which had miraculously appeared by the roadside, Juan Diego opened his cloak … and revealed a miraculous image imprinted upon it, which can be seen to this day.

On this feast day, we remember unborn children and their mothers. (The image is of a pregnant Aztec woman.) And so, I thought it would be a good day to respond to comments I’ve received recently from those who object to the idea that adoption should be represented as a pro-life alternative to abortion.

When we speak of adoption as a life-giving alternative to abortion, this in no way denies the grief and loss mothers who choose to relinquish their children exerience. In her book Because I Loved You, Patricia Dischler writes:

“Placing your child for adoption is an event that will affect the rest of your life. You won’t forget it. You will always remember the pain of the loss. But it is over. It is time to put it into your memories and not let it be the focus of your every day. In order to move ahead you may have questions you can’t answer that make you feel stuck. Voice those thoughts to your support network, and let them help you find the answers” (Dischler, 130).

There is no telling how many birth mothers also have a history of abortion (at least one commenter insisted that the birth mothers she has worked with never considered abortion for religious or other personal reasons), so that the two kinds of loss can be compared on more than an anecdotal level.

What we do know is that MANY more women have lost children through abortion than have endured the loss of relinquishment. Last year, 1.3 million women “terminated a pregnancy” and ended the life of her child.

What happened to these women? Did they simply “move on,” unscathed (as those who stand to profit most from the abortion industrysuggest)?

You may have a wide range of feelings after your abortion. Most women ultimately feel relief after an abortion. Some women feel anger, regret, guilt, or sadness for a little while.

Compare this to the information provided by the Elliot Institute:

Among the most worrisome of these reactions is the increase of self-destructive behavior among aborted women. In a survey of over 100 women who had suffered from post-abortion trauma, fully 80 percent expressed feelings of “self-hatred.” In the same study, 49 percent reported drug abuse and 39 percent began to use or increased their use of alcohol. Approximately 14 percent described themselves as having become “addicted” or “alcoholic” after their abortions. In addition, 60 percent reported suicidal ideation, with 28 percent actually attempting suicide, of which half attempted suicide two or more times.

What about these women? Do we simply shrug our shoulders and let them suffer — and turn a blind eye to the thousands of women who are poised, ready to make the same damaging choice? Or is the most humane and Christian thing to do to help these women understand the full impact of their choice before they make it … and to give those who do not feel able to parent, another option?

We live in a fallen world, and suffering is an inescapable part of the human condition. Our choices have real consequences: some that touch us, and some that touch other people. Some affect our lives here and now, and others affect our long-term spiritual health and relationship with God.

By acknowledging the seriousness of abortion, for example, the Church teaches that this act has long-reaching affects for all concerned:

The Church…  makes clear the gravity of the crime committed, the irreparable harm done to the innocent who is put to death, as well as to the parents and the whole of society. (CCC 2272)

The “irreparable harm” done to the child is the focus of the pro-life movement — speaking on behalf of children who cannot speak for themselves.  However, we can never forget that great harm is also done to the mother — who may feel she has no “right” to name her pain, since it was largely self-inflicted.

So she remains silent. And in the silence, evil prevails. By its nature, sin is bondage — it affects the way we think (leading us away from truth and deeper into self-deception), the way we choose (hardening ourselves against God through our habitual choice of wrongdoing), the way we live (inflicting greater suffering on ourselves and others).  Unless we bring our sin to the light, it festers until it becomes larger than life  … large enough to overwhelm us.

On the other hand (CCC #1847), “To receive his mercy, we must admit our faults. “If we say we have no sin, we deceive ourselves, and the truth is not in us. If we confess our sins, he is faithful and just, and will forgive our sins and cleanse us from all unrighteousness” (1 John 8-9).

Thousands of women (and their families) have discovered the liberating power of God’s mercy and forgiveness through groups such as “Rachel’s Vineyard,” “Silent No More,” and “Abortion Changes You.”

If you have had an abortion, and feel as though God could never forgive you … Or if you’ve pushed God out of the picture altogether, not wanting to think about the possibility that one day you will see your child again, know that there is hope for you.  God has not abandoned you, and knows that human weakness sometimes causes us to make choices out of fear, or shame, or ignorance. He is waiting for you, even now, to turn back to Him so the healing can begin.

You may feel as though you have lost your way, that there is no going back.  This is simply another lie from the evil one. In the words of concentration camp survivor Corrie ten Boom,  “Hell hath no pit so deep that God’s love is not deeper still” (“The Hiding Place.”) It was this assurance that allowed her — years later — to shake the hand of the prison guard from the camp that had killed her father, brother, and sister.

If you have lost a child … whether that child is in heaven, waiting for you; or your child is somewhere in the world, wondering about you … you have already suffered a great deal. Like many kinds of loss, the pain may never go away entirely.  And yet, God wants you to embrace life as a gift, and to offer Him your pain so He can begin to heal you.

You are God’s precious child. No matter how much you have messed up, the love of your Heavenly Father is something you can always count on. You need not remain silent in your grief. God is listening.