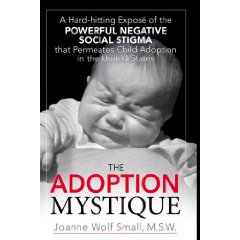 My article “Anti-Adoption Advocacy: How Should We Respond?” drew a wide variety of responses. The ones that gave me the greatest pause came from those I mentioned in the article as being against adoption, who wrote to protest.

According to co-founder/executive director of Bastard Nation (B/N) Marley Greiner, “We are concerned only about the civil right of all adult adoptees to receive their obcs [original birth certificates] upon request without government interference.”  (Ironically, the most heated attacks concerning the adoption/abortion issue came from members of his organization.)  However, her comments reminded me of the complexity of the issues surrounding adoption, and that to seek reform in one area is not the same as wanting to eliminate the practice altogether. (In my next column at CE/CM, I will examine the issue most central to the B/N crowd: birth records.)

For now, I’d like to address a comment posted by the author of this book, The Adoption Mystique by Joanne Wolf Small, MSW. She contacted CE to correct my perception, saying that she is in fact pro-adoption. I admit it made me sit up and take notice. Reaching for her book, which was still sitting beside my computer, I read the bio: “[Ms. Small] is herself adopted [at six weeks] … Her belief in the adoptive family as a positive alternate is dissonant with a widespread, covertly held public image” (TAM, back cover).

Hmm… how was it that I concluded that she was against adoption?

The Adoption Mystique:  What’s the Message?

Admittedly, I’m relatively new to the adoption scene; my primary work experience is in religious publishing. As a book editor, I learned about a “seven second rule” that states that a customer decides within seven seconds of picking up a book whether to buy it. Consequently, publishers spend a great deal of time and money on spine treatment, front cover art, back cover copy, and interior design – they know that if these don’t pass muster, the customer won’t read even the table of contents.

What did I see when I picked up this book? And (just as important) how did it affect the way I interpreted its contents?

Now, like I said, I’m still learning to negotiate the adoption landscape (and associated minefields). To me, this book does not exactly scream, “This book is pro-adoption.”

What I did not consider – and now realize is vitally important – is that to be in favor of necessary adoption reform is not the same as being “anti-adoption.” Anti-adoption groups do exist (at least one bemoaned the fact that I had not mentioned them by name in my article).

However, I’m beginning to understand how Small’s perspective (though not always easy reading) can in fact help adoptive parents: By reminding us about the unspoken subtexts of adoption so that we can anticipate potential problems, making us better able to guide our children as they grow into confident, well-adjusted, self-determined adults.

So… Here are some of the issues raised in The Adoption Mystique that provide rich food for thought. I’ll mention three points here.

The Adoption Mystique is not easy reading for any adoptive parent, but it does raise awareness about issues surrounding adoption that we must consider – and be willing to confront – if we are going to help our children reach their God-given potential.

Thank you, Ms. Small, for challenging me to take a closer look.

15 thoughts on “Anti-Adoption? Review of “The Adoption Mystique” by Joanne Wolf Small, MSW”