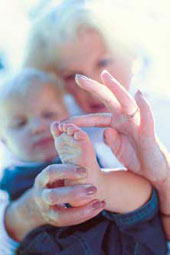 In 1978, President Jimmy Carter declared the first Sunday after Labor Day National Grandparents Day. Have you hugged a grandparent today?

The September 2008 issue of Metro Parent has an article about how the role of grandparents has changed in contemporary society. According to AARP:

Of course, all grandparents — no matter how much time you spend with your grandchildren — play a vital role in the lives of their children’s children. Their experience, patience … and humor adds perspective and balance to our own parenting efforts.

It wasn’t until I became a parent myself that I fully began to appreciate my own mother who, as my father often says, was “Born to be a grandmother.” When Craig and I decided to foster-adopt Christopher and Sarah, my parents (who already had seven grandchildren) told us, “You bring ’em to us, we’ll love ’em.”

And they have.  Happy Grandparents’ Day, Mom and Dad!